What you Need to Know About Bitcoin Traders 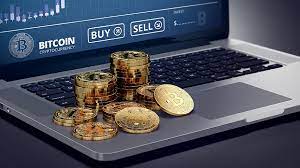 Many of us have heard about Bitcoin, and some, who have not, may wonder what it is; this brings us to the fundamental question, what is Bitcoin? Well, Bitcoin can be described as a digital currency that one can buy, sell, and even exchange directly with no intermediary such as a bank; this brings us to bitcoin traders, cryptocurrency platforms that let their users trade manually or use automated trading figure. This platform allows users to deposit flat currency and use the funds to purchase cryptocurrency.

Bitcoin trading involves speculation of movement in cryptocurrency’s price. Traditionally it involved buying Bitcoin through an exchange, hoping its prices would rise. Cryptocurrency traders use derivatives to speculate on the rising and falling of prices.

With IG, one can take a position on the price of Bitcoin with financial derivatives such as CFDs. The product helps one take advantage of the price movements in either direction without taking ownership of the coins; there’s no need to take responsibility for the security of Bitcoin tokens. One needs a platform where buyers and sellers exchange dollars for coins to buy Bitcoins.

How to buy Bitcoin

After choosing your exchange, fund your account before investing in Bitcoin. If your exchange has a wallet, you can place an order to buy Bitcoins once it is funded. One can buy bitcoins depending on the platform he uses by tapping a button or entering the Bitcoin ticker symbol and then inputting the amount you wish to invest.

How do you Store your Bitcoins?

Depending on the platform one uses, an integrated Bitcoin wallet is where one safely stores his Bitcoins. However, some people may not feel safe with their Bitcoins stored or connected to the internet, where hackers can easily steal them. Therefore, significant private insurance companies reimburse their clients when these cases arise.

Bitcoins can either be stored offline or online in the following ways:

This device helps you store your Bitcoins by storing the private keys to your assets and allowing you to interact with the wallet without exposing your data; this keeps your Bitcoins safe from hackers improving its safety. Examples of hardware wallets include Trezor and Ledger.

It’s also known as a cold wallet. After all, it’s considered a secure way to store Bitcoins because it is a storage type inaccessible via an internet connection. You can store your Bitcoins on a paper wallet that generates a public key for your Bitcoins.

These wallets are considered hot because they are downloaded to keep your crypto asset. An example is Trust Wallet, a form of mobile wallet where one can store Bitcoins.

Several exchanges trade Bitcoins. Most exchanges that trade Bitcoins let you keep your crypto within their wallets. There are several crypto exchanges, but the most commonly used is the eToro or Coinbase.

Only the owner can know the number of bitcoins they have. It is made possible because Bitcoin users can only be identified by their numerical codes and have several public keys; it ensures that there is no tracking that can be done publicly and can’t track the transactions back to the owner. Blockchain technology also keeps Bitcoins safe from fraud.

Bitcoin prices change drastically; It, therefore, makes them highly volatile. For instance, in 2017, Bitcoin was valued at $975.70; in a few months, it spiked to $20,089. It can be viewed as a benefit since it can result in high returns despite being volatile.

Bitcoin is an independent currency. Therefore, it’s not being controlled by any government or central bank. It simply means the authorities are unable to freeze or demand your coins. There is also no viable way of implementing taxation on Bitcoins. It gives users complete control over their money because the price is not linked to government policies.

Cryptocurrencies see no borders, and that’s a more significant advantage. It makes Bitcoin a universal and accessible currency. It makes spending and exchanging money in different countries more straightforward and better. It’s possible to pay for goods and services using bitcoins from places accepting them and can be sold quickly at any moment.