Important Difference between C vs Python You Should Know 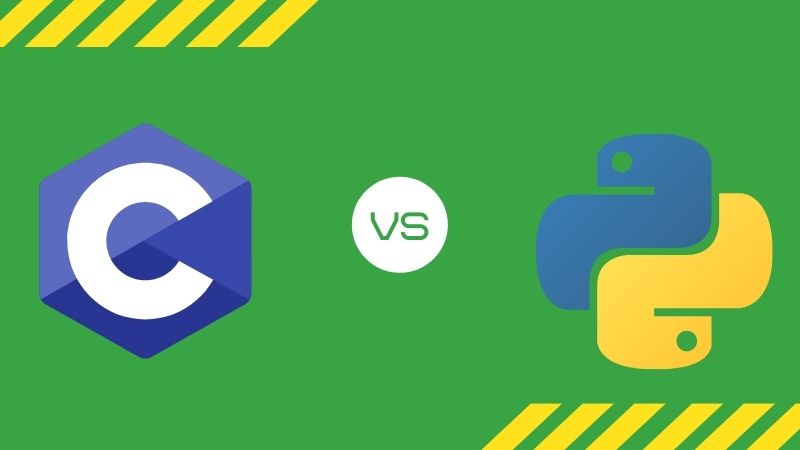 When people start their career in computer science or related fields. One of the most frequent queries that arise is which programming language to choose. Well, we all know that there are various programming languages. For example, Java, JavaScript, C++, etc. But there are two languages that attract coders the most. They are C and Python.

Well, C was developed before Python. And at the time when C was released, it got a lot of attention. But nowadays, Python is more popular than C.

So, programmers and coders need to know the key difference between both. This blog helps you in understanding C vs Python.

And if you want to learn more about C# vs Python.

Python, on the other hand, is run through an interpreter rather than a compiler. Python contains several fully formed built-in and predefined library functions. Whereas C has only a few built-in functions.

Python is simple to learn and use, but C requires more in-depth expertise to code and use.

Now, let’s discuss both of them in detail.

C is one of the oldest general-purpose programming languages. It was created to build Unix utilities. In order to re-implement the Unix operating system’s kernel it uses C. Nowadays, to construct a variety of firmware and portable systems, it uses C.

Following are the main features of the C programming language;

Python is a general-purpose high-level interpreted language. It is one of the most promising languages of the future. Python’s indentation is one of its most important features. It has been heavily focused to increase code readability. Python supports several different programming paradigms. Such as Object-Oriented Programming, Functional Programming, Structured Programming, and more.

Python is incredibly user-friendly. Because of python’s simplicity, many developers are now using it as their primary programming language.

The features of Python are as follows;

Python: Python is a programming language that focuses on object-oriented programming.

Python: Python is a high-level language. It uses an interpreter to translate Python code into machine language.

C: The C programming language is compiled. Compilers are special programs that verify the C code line by line. If any errors are detected on any line, the program compilation stops immediately.

Python: Python is a programming language that is interpreted. Interpreters are special programs that check the full Python code. It indicates all mistakes in the code all at once.

C: Because C is a compiled language, it is quicker than Python.

Python: Because Python programs are interpreted. They are typically slower than C applications.

Python: But Python does not support Pointers.

C: Because C is a procedural programming language. The functions are the most common functional units.

Python: Because Python is an object-oriented programming language. Most of the functional units are objects.

C: In comparison to Python, C is a less robust programming language.

Python: Python is a language that is used for multiple purposes.

C: C uses the .c extension to save C code.

Python: Python uses the .py extension to store the code.

So, in the above blog, we have learned C vs Python. We can say that big software companies use both programming languages. If you learn both languages, it would be very helpful to you. Those who are looking for a job in the software industry. They should learn more about Python. Because Python provides diversity and flexibility. Also, data scientists use Python extensively.

On the contrary, the people who want to work in games engines, building firmware systems, etc. It would be best to learn C programming languages. In the last, C vs Python blog helps you better understand the difference between C and Python.